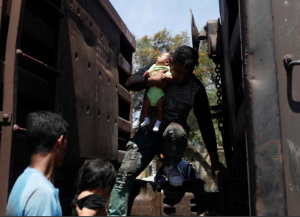 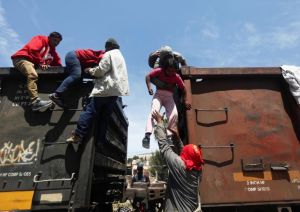 These are Central American immigrants alighting from what they call “la bestia” (the beast) or “el tren de la muerte” (the death train”), a network of about 15 Mexican freight trains which originate in the southern state of Chiapas & travel 1,450 miles north to the US border. Train companies have banned immigrants from traveling atop or inside freight cars & do not stop for immigrants to board or disembark but it is the only free way to travel north to the border & an estimated 500,000 do so every year. It is extremely dangerous & many lose their limbs just boarding. Those who lose limbs must return to countries with no social security provisions at all, let alone for those with disability.

Although the Mexican government made it legal for immigrants to transit Mexico to the US border, the drug war intersects with immigration, making immigrants easy prey to drug gangs & to paramilitary operatives associated with the Mexican army. Those traveling on la bestia are subject to kidnapping, rape, assault, robbery, & there have been some instances of mass murder, dismemberment, & mass graves. While the Mexican government functions as a southern flank of US immigration policy in its treatment of Central American immigrants, all along the train route, Mexican working people have asylums & shelters where immigrants can rest, get medical care, eat meals, get some protection. In the eastern state of Veracruz, local residents rush to every passing train to pass bags of food to immigrants.

For years, most of those traveling las bestia were young men & women & it is a significant change to see them bringing infants & children with them. In the past, they would find work in the US & send money home to their families. That entailed painful ruptures in family relationships & often a sense of abandonment among children left behind. It’s not clear why they are now bringing their children with them since it makes crossing the US border much more difficult & dangerous. US immigration reports that the majority of those caught crossing the border now are young women with children & unaccompanied children. This makes the endangerment of children a feature of US immigration policy. Investigations are required to understand these changes in immigration patterns but no investigation is necessary to demand the US end its racist, anti-immigration policies & open the borders.