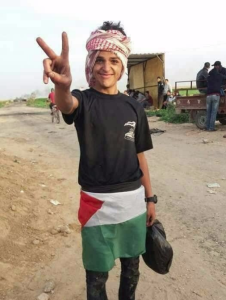 This is 17-year-old Tahrir Wahba who died from wounds sustained during the Great Return March in Gaza last Friday on April 20th. He is one of five young men, all unarmed, peaceful protesters, killed just last Friday by Israeli snipers. May he Rest In Peace.

Actress Natalie Portman was castigated by Zionists for refusing an Israeli honorific associated with Netanyahu. Zionist critics suggested she declined the award as a supporter of BDS. For the umpteenth time, she took all distance from BDS to say her declination was based only on objections to Netanyahu’s policies toward Palestinians. Since apartheid & genocide are inherent to his policies, it’s easy to understand her objections. What’s not easy to understand is why those with her position do not support the cultural & economic boycott of Israel as a peaceful way to end apartheid & genocide.

(Photo of Tahrir Wahba from Great Return March on Twitter)