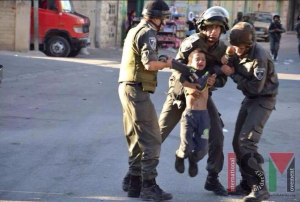 The photo on left is Kashmiri children & their father being harassed by Indian soldiers & on right is Israeli soldiers manhandling a small Palestinian boy. These images are ubiquitous in both military occupations.

We know from Palestinian & human rights testimony that it isn’t just the traumatic matter of harassing & manhandling little kids. Palestinian kids are targeted for violence including beating, kidnapping, torture, & incarceration in violation of countless international laws & by every standard of human decency. Human rights agencies testified that Israeli bombers hunted down children in the 2014 carpet bombing siege of Gaza. The images of small children covered in shrapnel injuries are an icon of that siege & documentation of human rights crimes. Just as iconic as dozens of horrific images from Kashmir of children & teens covered in permanently disabling pellet gun injuries.

It’s not uncommon for someone half-baked to reality to tsk-tsk the parents of Palestine & Kashmir for neglecting their kids & letting them get caught in crossfire. That’s the monstrous character of occupation: the entire people are commandeered into action from early childhood to old age. Lives are stolen in more ways than one. But children are not being recklessly placed in danger; they are being targeted. Israel explains the child fatalities by claiming Palestinians use their kids as human shields. India may soon spout that horse manure too.

Israel & India may be taking the barbarisms of targeting children to whole new levels of savagery but it is by no means original to either. Children by their nature speak to the free spirit in humankind. They bristle, rebel & react passionately against oppression & are the groundswell of revolution against it. Every new generation must be inculcated with inferiority, chastened, bullied, tormented into submission, because the oppressor is terrified of the young who give birth to rebellion & revolution.

In the archives of US apartheid known as Jim Crow there is a caricature tradition called “pickaninny art” which prevailed in popular culture until the civil rights movement of the 1960s upended Jim Crow & some of the cultural rubbish with it. Pickaninny art was a detestable presentation of tiny Black children, infants really, usually portrayed holding on to a twig suspended over a swamp of menacing alligators.

When you view image after image of this crap you question the deranged psychology behind cultural pleasure in seeing wee children threatened in such a monstrous way. You don’t have to be Sigmund Freud to see the cultural anxiety of the oppressor written all over that crap. It’s the violent imagination of how oppression will be managed & enforced by nipping it in the bud of youth–& is reflected in the war on Black youth.

Youth are the hope of revolution against oppression & standing with them is not an option–no equivocations, no buts or maybes.