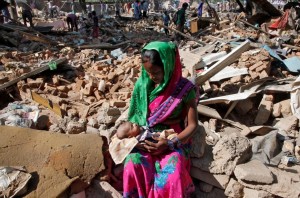 This woman with her infant is a slum resident in Chandigarh, India, whose home was just demolished by government bulldozers. Razing slums built, even for generations, on public lands is central to neoliberal policies of urban renewal & gentrification for an urban elite. It’s happening all over the world & is usually accompanied by stiff resistance from residents & violence from authorities, involving bulldozers, riot police, & arson.

Chandigarh is the capital & administrative center of two adjoining states, Punjab & Haryana, but is ruled directly by the central Indian government. It was the brainchild of Jawaharlal Nehru, the first prime minister of India after independence from Britain in 1947. He wanted to develop infrastructure projects like dams, heavy industries, & planned cities to force the development of India after colonialism. He commissioned the French architect Le Corbusier to develop the master plan & the city epitomizes his vision of a modern planned city.

Nehru’s political methods of development were strikingly similar to those of neoliberal agencies like the IMF & World Bank today. Thousands of farmers were displaced & expropriated (including in the building of Chandigarh in the 1950s), ecological destruction accompanied the projects, local traditions & cultures were violently uprooted in many parts of India. Social movements arose in opposition

The slums of Chandigarh were non-planned settlements that developed from the migrant construction workers who came to build Chandigarh & settled on vacant lands nearby. Originally, the city residents were government functionaries but it is now one of the most expensive cities in India. The high cost of real estate is forcing suburban development in the outskirts & explains the government demolition campaign of the past few years to reclaim public lands by bulldozing the slums.

The demolition drive was already in operation when Narendra Modi took over as prime minister in May 2014 because neoliberal policies were already in force in India, making the country the World Bank’s largest borrower. Thousands of slum homes had already been torn down & thousands made homeless. But Modi accelerated the process when he designated Chandigarh as one of the main cities in his Smart City project to modernize & develop infrastructure. It’s a case of Nehru’s vision redux combined with IMF/World Bank barbarism. The World Bank is already involved in the smart cities project but India is looking to it to bankroll the project which would certainly include razing slums in the 100 designated smart cities.

Somewhere in all the development, demolitions, & smartness, affordable housing got lost even though a coalition of activists in Chandigarh have actively opposed the demolitions.

Housing is a central issue in politics everywhere in the world. Slums are growing massively because of neoliberal expropriation & just as often are razed to make way for upscale resorts, shopping malls, exclusive housing.