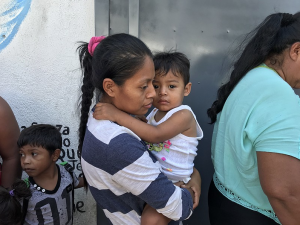 Trump is waging a warped, spiteful campaign against the asylum caravan from Central America organized by the immigrant rights group Pueblo Sin Fronteras. It’s extremely dangerous for Central Americans to transit Mexico whilst the country is under occupation by its own army & during the reign of drug cartels which are intertwined with the government & army. Those transiting to the US border have been robbed, raped, assaulted, kidnapped, tortured, disappeared, murdered, & dumped in mass graves by paramilitary forces, cartels & criminal gangs. Pueblo Sin Fronteras began operating caravans about 15 years ago to protect groups of immigrants from such predations on their journey. We would probably not know about this caravan from Central America to Tijuana on the California border if Trump had not gone after them with his venom on Twitter & in speeches. He has actually urged Mexico to break up the caravan.

About a month ago, this caravan launched with 1,175 people, almost 80-percent of them fleeing political violence in Honduras. They included children between 1-month & 11-years-old; pregnant women; people on crutches & one in a wheelchair; elderly; & a group of LGBT teens. They are not coming to the border to enter the US as undocumented immigrants but as refugees seeking political asylum. The caravan proceeded on foot, on top of freight trains, & by buses traveling with the refugees. After Trump began his racist fulminations against them on Twitter, many of the refugees decided to remain in Mexico & seek asylum there. An estimated 600 have decided to continue on to the US border & demand asylum. Thus far, about 400 of them have arrived in Tijuana & are living in an encampment near the border crossing to California. Yesterday, they began presenting themselves at the San Ysidro port of entry which has a processing center for asylum requests.

Trump’s ongoing rantings against the caravan have ironically brought attention to who immigrants & refugees from Mexico & Central America are. This is generating sympathy with them but unfortunately not any significant political protests in the US demanding they be given asylum. US officials at San Ysidro, reflecting the racism & xenophobia of US immigration policy, make it clear that the motives of the refugees are suspect & that those with invalid claims will be denied entry & swiftly deported.

It’s going to be a long, hard battle–not just against the Trump regime but against the stranglehold the Democratic Party has on many immigrant rights groups–to win immigrant & refugee rights. But it is one of the most important political battles of our era & is directly tied to war, occupation, genocide, & to sweatshop economics.

This young mother & child are among the Central American refugees at the San Ysidro port of entry waiting to be processed by immigration authorities.

Immigration rights are human rights. Open the borders. No human being is alien to us.