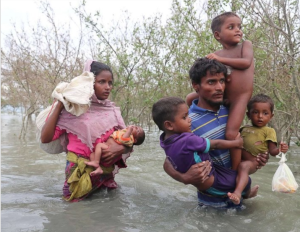 General Min Aung Hlaing, who is Commander-in-Chief of the Burmese military since 2011 & chief architect of the Rohingya genocide, issued a statement expressing gratitude to China for “its stance on & support for Myanmar” in conducting the Rohingya genocide which the fascist general called “the conflict in Rakhine.”

It would be valuable to know what Chinese working people think about their government’s direct involvement in genocide but political repression in China makes a movement opposing that involvement difficult to organize. China is involved in persecuting the Uyghur Muslims of China & the Buddhists of Tibet so it isn’t religion which determines the Chinese regime’s involvement in the Rohingya genocide. It’s their stinking rotten politics combined with their economic & military investments in Burma.

Photo is Rohingya family wading through Naf river to asylum in Bangladesh. Stand with the Rohingya people against genocide & for human, democratic, civil, & refugee rights.