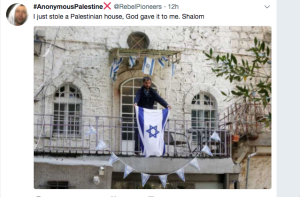 Satire & sarcasm used by the powerful against the oppressed is propaganda. When used by the oppressed, it is a weapon for freedom which helps blunt the grief & release the anger of war & occupation.

This sarcastic tweet mocks the Israeli Law of Return where any Jew living anywhere in the world has citizenship rights in Israel & occupied Palestine, including the expropriation of Palestinian homes & lands, while millions of Palestinians live in refugee camps. It also ridicules the contemptible Zionist tenet that God deeded Palestine to Jews in the Bible.