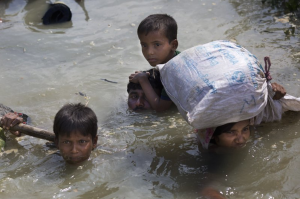 The Burmese junta has proposed to take back the now 500,000 Rohingya refugees who fled military & nationalist death squads. Last month, Suu Kyi made a similar proposal to take back “verified” refugees, which of course means all Rohingya are excluded according to Burmese citizenship laws. This is nothing but a grandstanding gesture because unless repatriation is preceded by the immediate complete withdrawal of all Burmese military forces & unless Buddhist nationalist death squads are rounded up & prosecuted, it would be nothing but a death trap for Rohingya refugees to return. They’re still burning Rohingya villages down, still hunting men, women, & children down & executing them or burning them alive. Any repatriation program would require the Burmese junta allow thousands of human rights monitors & reporters into Arakan state to make sure such a program was not in fact a death trap to finish off those Rohingya able to flee to safety.

This is a Rohingya family crossing a creek of the Naf river into Bangladesh after days of a harrowing journey trying to elude death squads. Suu Kyi & the Burmese generals insult intelligence by suggesting that refugees turn around & trust they will be safe in villages torched to the ground where many of their family, friends & neighbors were burned to death or executed in the most gruesome ways & when the army has mined the border so they cannot return without being blown up.

Stand with the Rohingya people in their struggle against genocide & to return to their homeland with full human, democratic, civil, & refugee rights. That will require taking down the junta & Suu Kyi.