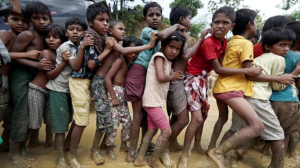 From the most unexpected places we find truth–not in the existential sense but as opposed to fake news. Bangladesh Foreign Minister AH Mahmood Ali was discussing Burma’s proposal for repatriating some refugees. The proposal is nothing but a stunt for those willing to be fooled–or as Ali put it, a way for Burma to “neutralize” opposition from other governments. Of course, Ali doesn’t say is that there is no opposition from other governments that is more than ceremonial. In a genocide, words don’t count. Action is required & that has not been forthcoming from any government. Where is Erdogan now that the grandstanding moment is over? Most importantly, the Rohingya fled genocide & would not willingly go back to be finished off by death squads. You’d have to be as moronic as Trump not to recognize that.

Bangladesh can keep trying to prevent refugees from entering the country & can make life hell on earth when they arrive, but in his comments Ali acknowledges that they cannot work with Burma to force refugees at gunpoint to return to certain death without facing political consequences–given the hundreds of thousands of protesters around the world in support of the Rohingya, .

Now here’s that moment of truth: the Burmese generals & Suu Kyi maintain that the genocidal offensive against the Rohingya was ignited when ARSA attacked police stations & an army base on August 25th. At one point, Bangladesh offered to deploy troops to help Burma beat back the ARSA terrorists. But in this strategy meeting, minister Ali said the Burmese army was strengthening its forces in Arakan state a month before August 25th. Which is exactly what Rohingya analysts & Burmese dissident Maung Zarni reported. This was a planned genocide & the alleged actions of ARSA had nothing to do with it.

Minister Ali also said that the Burmese army worked with Buddhist nationalists to execute the genocide. Again, exactly what Rohingya analysts & Maung Zarni reported: that the Burmese army was arming & training civilian death squads & working in concert with them to torch villages & commit atrocities against Rohingya & Hindu civilians. Ali went on to say that the Burmese junta & Suu Kyi were spreading fake news by trying to make the issue “Islamic terrorism” or “extremist Bengali terrorism” rather than admit genocide. Our man Ali did not go on to explain why Bangladesh offered troops to fight Rohingya terrorism when they knew it was just propaganda to justify genocide.

These little Rohingya kids, many of them orphaned by genocide, are the ones Minister Ali has to face when he explains the treacheries of the Bangladeshi government.

(Photo of kids at refugee camp in Bangladesh)