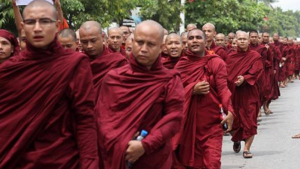 This is what the KKK, English Defence League, or ISIS would look like in Burma, wrapped in the garb of Buddhist monks. Last Sunday they marched behind their leader Ashin Wirathu (who runs a “monastery” of 2,500 of these guys), called by Time magazine “The Face of Buddhist Terror” in 2013. But of course the face of Buddhist terror is now Aung San Suu Kyi who fronts for the Burmese generals in their genocide against Rohingya Muslims.

The rabidity of Wirathu’s hatred for Muslims is matched by supremacist, nationalist, & fascist forces worldwide–of the kind we see unleashed in Arakan state against the Rohingya & in Syria against the revolution. Dr. Maung Zarni, the Burmese Buddhist dissident in exile, called Wirathu a “genocidal demagogue” unleashed by the Burmese generals. As a Buddhist, he said “Stop calling him a “monk.”

There’s no reason to root around in the teachings of Buddhism, including in Theravāda, the current of Buddhism Wirathu follows, to find the basis of his nationalism–anymore than one can find the roots of ISIS in the Quran or of the KKK in the Bible. These are reactionary, counter-revolutionary political currents that use religion to justify their hatred. The hatred for Muslims that mobilizes these “monks” out of meditation to march down the street chanting hate mantras against the Rohingya is rooted in ethnic conflict in Burma where the Bamar (Burmese) are the dominant group. It is a hatred orchestrated, incited, & unleashed by the generals as Dr. Zarni said.

The way to stop these guys is not to mobilize vigilantes with brickbats to punch-a-fascist-in-the-face but to collaborate with Rohingya activists in building a worldwide solidarity movement to stand against & back down supremacist, nationalist, & fascist forces. They’re thugs & cowards at heart hiding behind state power. Building such a movement is not a pipe dream but a possibility.

Stop the genocide against the Rohingya people. Full solidarity with the Rohingya struggle for human, democratic, civil, & refugee rights.