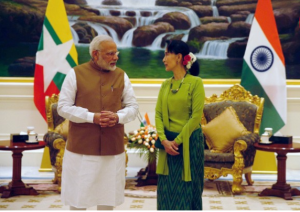 So is it communal violence between Buddhists & Muslims in Arakan state as much of media claims or is it jihadi insurgents as Modi, Aung San Suu Kyi, Putin, & Assad supporters claim? Or has jihadism now infiltrated communal conflict & there is no longer a difference? What a pile of horse manure we conceive when we practice to deceive.

When Modi met with Suu Kyi yesterday they exchanged felicitations over defeating terrorism in Arakan state–by which they meant ARSA insurgents, a possibly imaginary ragtag group who they claim attacked security forces. Why the Burmese army & civilian death squads have to torch whole villages, rape, execute, & hunt tens of thousands of Rohingya civilians like animals to get those terrorists is not explained.

There is something particularly grotesque about this exchange between Modi & Suu Kyi. India is attempting to deport 40,000 Rohingya refugees back to Burma but Burma doesn’t want them back & used artillery from India to drive them out. There’s also something particularly monstrous about this exchange because of India’s persecution of Muslims, including the 2002 pogrom led by Modi in Gujarat, & the occupation of Kashmir where India employs the same human rights crimes Suu Kyi is using against the Rohingya people.

Stop the genocide of the Rohingya people. Stop the deportations. Full solidarity with the Rohingya struggle for human, democratic, civil, & refugee rights.