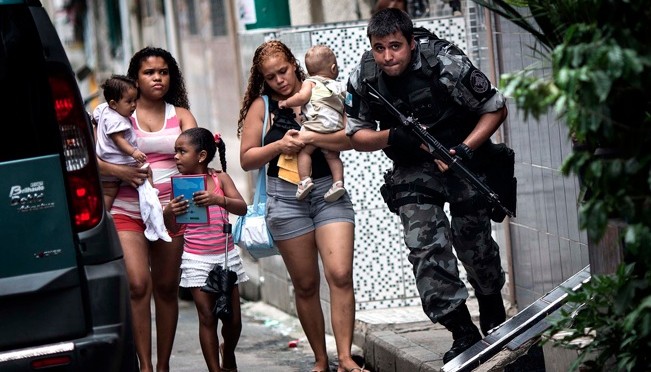 This image of civilians caught in crossfire is iconic of occupation–from Northern Ireland to Iraq, Afghanistan, & here the favelas (shantytowns) of Rio de Janeiro, Brazil. Brazil notoriously has one of the highest numbers of homeless children & slum residents in the world due to ruthless neoliberal plunder of its land & resources. In a process we’ve seen played out on every continent, rural workers are dispossessed & forced to migrate abroad for work or to city slums. But now those slums conflict with IMF programs mandating privatization of public lands & gentrification/urban development schemes so the slum residents must be evicted again.

Favelas in Rio de Janeiro are not just located on desirable urban real estate; many are within a stones throw of stadia where the 2014 World Cup & 2016 Olympic games will be played. So the Brazilian government created an inflammatory view of favelas as havens for criminal drug mafias & under the guise of fighting the drug war marched special forces military units trained in urban warfare into the favelas (starting in 2008) armed with assault weapons & armored vehicles.

You can’t believe the baloney Brazilian politicians & world media use to justify this brutal occupation as a pacifying program meant to bring social harmony. They claim, without an ounce of sarcasm, that soldiers & riot cops will no longer just summarily execute suspected traffickers but will play a role in social development; they will organize youth sports clubs, schools, skill development workshops, teach ballet classes, & other “peaceful forms of socialization”–as if favela residents were feral animals.

The occupying army hasn’t gotten around to the social service programs in the past five years since they’re up to their eyeballs ransacking homes, forcibly evicting people & making them homeless by the thousands, under the guise of routing out the drug traffickers. Residents have made quite clear they want education, health services, & less provocation & violence from the cops. There isn’t a single public service they do not need, including electricity, waste management, health clinics (dealing with every medical need from prenatal care to drug addiction to treatment for tuberculosis), schools, housing, sanitation, roads, sports programs, & most of all, jobs. What they’ve gotten is lectures on trash clean-up.

The rhetoric used to justify this brutal police occupation is not at all coincidentally a clone of what is used against Black youth in the US to justify often martial law conditions in many Black communities & the suspension of civil liberties–in particular “stop & frisk” laws & the summary execution of hundreds of Black youth minding their own business on city streets. When people believed the lies against Black youth & allowed suspension of the Bill of Rights in the Black community without protest, it was only a matter of time before the government trashed the Bill of Rights for immigrants. And now it’s under siege for all of us. That’s why “an injury to one is an injury to all” is not just a romantic, feel-good ditty we chant like a mantra. It’s an iron law of justice for working people.

We don’t know the scope or the statistics, but drug addiction among the poor of Rio de Janeiro is likely quite high–and favelas may well be a center for drug peddling. But the drug mafias orchestrating global trafficking don’t live in favelas; they live in mansions. Going after favela residents is nothing but a fancy switch & bait device to deflect attention from the real criminals.

Military raids in the favelas of Rio have increased in the past several months since the 2014 World Cup games are scheduled to begin in June when hundreds of thousands of well-heeled tourists will be pouring into the city. The Dilma Rousseff regime sent special forces units & more riot cops into the favelas to quell an alleged wave of violence in the “pacified” slums. If there is unrest, it’s more likely opposition to the brutal occupation. As we can see from this photo, the security of favela residents is not a concern.