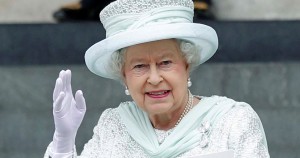 How can Betty look so calm when British jihadis are plotting to blow her up next weekend along with Phil, who she’s always called her “anus horribilis,” & some of her worthless kids? British authorities say they have it on good authority that the plot is being masterminded from Syria by Islamic State commanders.

No arrests have been made so far but counter-terrorism officers are monitoring the plot’s development closely. Well what the hell are they waiting for? The jihadis to land at Heathrow & start chopping off heads?