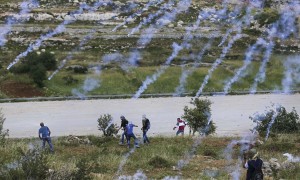 Breaking the Silence (BtS) is an Israeli group of veterans & soldiers who since 2004 have collected hundreds of testimonies from soldiers in the occupied West Bank, Gaza, & East Jerusalem documenting abuse of Palestinians, vandalism & destruction of their property, & Israeli war crimes.

BtS comes under harsh criticism, of course, from Zionists but they are also frequently criticized by anti-Zionists as soldiers who have committed war crimes or who cover up war crimes because their testimonials are anonymous.

Earlier this month BtS released a report titled “This is How We Fought in Gaza 2014- Soldiers’ Testimonies from Operation “Protective Edge”.” The report includes testimony from sixty IDF officers & soldiers which document Palestinian claims of ethnic cleansing & massive Israeli human rights crimes as a matter of military policy.

It’s quite likely that most BtS activists & testifiers are patriotic Israelis committed to Zionism who sustained the PTSD of soldiers carrying out war crimes under orders. They are psychologically & politically rattled. It’s one thing to hate on Palestinians in cafes & bars; it’s quite another to shoot them down, including children, in cold blood.

Among those anti-Zionists who criticize BtS, there are several motivations. One wants to excoriate all soldiers & veterans for war crimes (even in Israel’s conscript army). Others object to media privileging the testimony of BtS over the voices of Palestinians. And some object to the methods & politics of BtS.

The question of soldiers & veterans is not unique to Israel in Palestine but has been a matter of dispute since WWI, particularly in the socialist movement that saw conscripted soldiers as brothers (& now sisters), not as enemies. Because the US has endless wars, this has been an issue in the antiwar movement–with conscientious objectors believing the only moral policy is to refuse to serve. But the US antiwar movement, under the influence of socialist activists, has always worked closely with veterans & active duty soldiers because their antiwar testimony is so powerful. Anyone who has watched veteran testimony from the two Winter Soldier events (available on YouTube) can see that undeniable truth.

The Pentagon works tirelessly to alienate veterans from the antiwar movement & to convince them we are hostile to them as war criminals. On the contrary. Antiwar veterans are the very backbone of the US antiwar movement, leading off every march as a symbol of the respect we give them.

If media privileges the voices of Israelis over Palestinians, that can hardly be a charge against BtS. The alternative would be they do not gather testimony. And the voices of Palestine would still not be heard.

If there are objections to the personnel, methods, & politics of BtS, how does that distinguish them from hundreds of other political organizations? They don’t pretend to be a party of revolutionists or saints. Nor do they denounce Zionism. Likely most just want Israel to be the country they were told it is with the “most moral military in the world” as it claims instead of the genocidal machine they now know it is.

Tis a shame to denounce BtS or to attempt to discredit their work–no matter what their problems. Instead, their testimony from occupation & genocide should be widely promulgated–not in place of Palestinian voices but documentation for Palestinian claims & strengthening the call for BDS & building Palestinian solidarity.

Photo is Palestinians running from tear gas & Israeli troops on Nakba Day (May 15th), near Ofer prison in the West Bank where Israel warehouses Palestinian activists, including children.