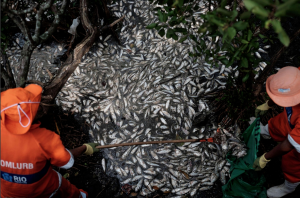 A 120-page document came out of the June 2012 UN conference in Rio de Janeiro, Brazil on sustainable development. For sheer tonnage of affirmations & reaffirmations about eradicating poverty & protecting the environment it just can’t be beat & is only rivaled by the complete mendacity of the damn thing. No one gives more compelling testimony to that than the indigenous peoples of Brazil fighting bare-knuckled neoliberal enterprises stealing their lands, assassinating their leaders, mowing down the rainforest.

Whatever president Dilma Rousseff was in her youth, it is not flattering that she is now called “Iron Lady.” When your sobriquet begs comparison to the detestable Margaret Thatcher, you’re headed in the wrong direction. The only political forces that defend her are supporters of neoliberal plunder & Stalinists who attempted to portray protests against her as fascist. Is it relevant that Stalin is a nom de plume meaning “iron man.”

Brazil has immense environmental & social problems: massive plunder, massive poverty, unemployment, & slums, massive homelessness. It has one of the biggest homeless child populations in the world & has now become the go-to destination for child prostitution. So why the hell is the government sponsoring the 2016 Olympic games to the tune of billions rather than addressing social problems like housing?

In this photo municipal workers are removing dead fish from the Rodrigo de Freitas lagoon in Rio de Janeiro. They’ve removed over 37 tonnes just this week. Fifteen years ago they removed 100 tonnes because the lagoon stinks so damn bad. In 2008-2009, they removed 365 tons of algae. But they haven’t shut down the waste pipes discharging sewage into the canal & sucking the oxygen out of the water, which is causing the fish die-off. The clean-up project will cost US$28 million, a worthy investment considering the lagoon is connected to the Atlantic Ocean & stinks up the city.

They are not cleaning up the lagoon as a result of all their 2012 affirmations but because it will be the venue for Olympic rowing & canoeing events next year. If they could deodorize the lagoon by pouring Chanel #5 or Shalimar into it they would & leave it at that. But even an Olympic gold medal isn’t worth plowing through tonnes of stinking fish bodies, algae, & sewage.

Several reports discuss speculations about the cause of the stench coming off the lagoon. They found a few academics (of the kind who sing for their supper) to claim it goes back 300 years. They leave unexplained how they know that. Other people suggest open sewers draining from favela slums on the hillsides surrounding the lagoon are the problem or that rich condominiums around the lagoon bribe officials to secretly discharge their waste. Don’t you think that out of a $28 million budget they could get an engineer to find those sewage pipes & plug them up or at least find out where they’re coming from?