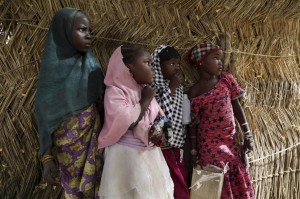 These apprehensive little girls are in Damasak, a town in northeastern Nigeria taken back last week from Boko Haram by a joint operation of the Nigerian army, foreign mercenaries, & a coalition of military forces from Chad, Cameroon, & Niger. They’re watching soldiers investigating a mass grave where they found up to 90 decomposed bodies decapitated or with their throats slit. It isn’t certain the crime was committed by Boko Haram since many Nigerians are almost as terrified of the army & police as they are of Boko Haram.

Boko Haram has terrorized northern Nigeria since 2009, attacking schools, churches, mosques. An estimated 11,000 people have died & hundreds have been kidnapped, including 276 schoolgirls abducted in Chibok one year ago next month. They are still missing & the corrupt, kleptocratic regime of President Goodluck Jonathan is accused of doing little to find them.

The joint military operations which managed to push Boko Haram out of all but three of the 20 districts they once held was likely an election maneuver on the part of Jonathan who was running for another term in last Saturday’s election. He was running against General Muhammad Buhari, a former president & military dictator who The Economist called “the least awful” candidate. Both candidates are completely beholden to the IMF & World Bank who are squeezing with deadly force. In the era of neoliberalism, the barbaric phase of capitalism, austerity & political repression are essential to plunder.

According to several sources, systemic political corruption has fed & not fought the Islamist fundamentalism & terrorism of Boko Haram in northern Nigeria. Critics of the regime include entirely establishment NGOs like Amnesty International & Human Rights Watch as well as the US State Department who all accuse the regime of egregious human rights problems including torture & degrading treatment of prisoners, rape, arbitrary arrest, denial of due process, extrajudicial killings by security forces, summary executions, violation of privacy rights, massive repression of civil liberties. The US wouldn’t see such atrocities as a problem so much as signs of a perfect ally.

It’s unspeakable that these little girls have to come of age & are completely vulnerable in a situation where the “liberating” armies are as dangerous as the vanquished irregular forces. Changing the world to make it safe for children is the most historic task facing humanity.