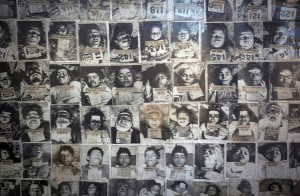 This photographic collage at the hospital in Bhopal is of those who died in the December 2, 1984 Union Carbide (now Dow) explosion. 25,000 died right off the bat; half a million were left with injuries which certainly meant long-term disability for many. And of course, the collage doesn’t include all those who have died & suffered with disability since.

The people of Bhopal have fought quite a battle to get justice & have lost every round in the court. These photographic collages exist to inspire resistance because the deceased were never just a statistic; they were beloved.

It’s not certain how we can now render solidarity but telling their story is part of it. Dow has quite a rap sheet for chemical crimes. We need to keep our hairy eyeballs on them & look for opportunities to support the people of Bhopal.