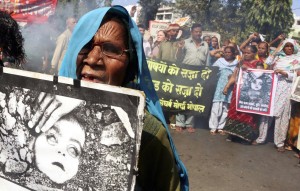 Survivors & relatives of those who died in the 1984 Union Carbide/Dow explosion protested yesterday in Bhopal holding images of their beloved. Grief is one of those powerful emotions that doesn’t lessen until there is justice.

The survivors fought relentlessly to have Dow removed as a sponsor of the 2012 London Olympics but Dow’s money provides it good standing in the association of neoliberal predators–the same association the International Olympics Committee belongs to, as evidenced in Brazil & at Sochi, Russia.

Solidarity demands being on the lookout for opportunities to support the people of Bhopal & any appearance of Dow would be an opportunity for pickets.