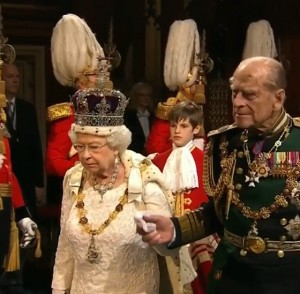 I really wanted to give everyone a report on the opening of Parliament with Betty & Phil Windsor. I get such a kick out of feudal pomp that I actually watched the whole damn thing on CNN hoping for a few chuckles & kernels of insight into feudalism. But it was like being at the Vampire’s Ball & I was left to wonder if the planet has been taken over by the undead.

The kiss-ass commentators on CNN tried to give dignity to groveling but it’s hard to drool & maintain composure at the same time. They kept insisting, in the face of overwhelming evidence to the contrary, that the opening of Parliament is a party environment–raising the question if partying under feudalism is a more restrained affair than under capitalism? Or is the difference in party style between oligarchs & working stiffs? Do you think a little booze would help?

This is Betty & Phil in their most festive demeanor ready to party hearty. If there’s a difference between party time & a funeral procession under feudalism, you wouldn’t know it from this event.