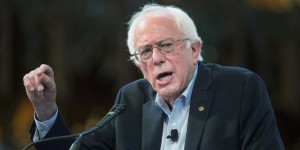 There are nearly 10,000 US troops in Afghanistan & probably an equal number of US-hired mercenaries. When Obama announced last October that he would keep 5,500 troops in Afghanistan after he leaves office in 2017, Bernie Sanders & Hillary Clinton were asked if they supported that decision.

Clinton said Obama made “the right decision.” Sanders said, “Well, yeah, I won’t give you the exact number. Clearly, we do not want to see the Taliban gain more power, & I think we need a certain nucleus of American troops present in Afghanistan to try to provide the training & support the Afghan army needs.”

Let’s not beat around the bush. Opposing war & occupation has been the sine qua non not just of transformational but of progressive politics for over 100 years. The US wars in Iraq & Afghanistan are so monstrous that to support them takes a special kind of political criminality on the part of politicians & half-witted racism, xenophobia, Islamophobia on the part of working people–a majority of whom oppose the war. But since Sanders talks a good line on student loans, what’s a few decades more of massive bombing & occupation in those two countries? They’re not Americans after all so they’re not really human.

(PS: for those Sanders supporters who call themselves socialists, it would be valuable to review the history of WW1 when support for the war among most socialist groups created a massive international rupture in the movement from which it has not recovered. But go ahead, campaign for Sanders since you’re probably not marching against the wars anyway.)