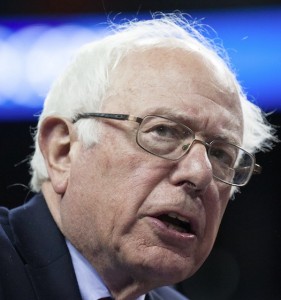 Last Monday, Bernie Sanders was asked by Chris Hayes on MSNBC if he agreed with Hillary Clinton that the political force behind the BDS movement is anti-Semitism. “I think there is some of that, absolutely,” he responded. Really!? We’d like him to elaborate on that very serious charge. What evidence does he have, what sources can he quote since he has kept himself 100 miles away from the movement & doesn’t know squat about what is going on? In fact, the movement, led by Palestinians, eschews anti-Semitism & polemicizes against it.

He went on: “Israel has done some very bad things, so has every other country on earth.” What a wimpy-assed defense of apartheid, ethnic cleansing, carpet bombing, occupation, massive incarceration of children & adults without charges, & land expropriations! With all the resources of a senatorial staff, is that the best he can do?

But there’s more wisdom from our man: “Israel has got to be defended, has a right to exist, but you cannot ignore the needs of the Palestinian people.” What needs are those? Does he have a clue? Is self-determination excluded? He called for the US to be more even-handed in how it deals with Israel & Palestinians. How would that work? How would the US balance off over $4 billion a year of military aid to Israel? Would it stop bankrolling the occupation, settlements, & bombing? Would it even just stop calling Palestinians “terrorists”?

Turns out Sanders didn’t miss much for not being present at AIPAC; he had an even bigger audience on MSNBC.

Cut through this stinking morass of apologetics & honor the economic, cultural, & academic boycott of Israel. Buy nothing with a barcode beginning 729.