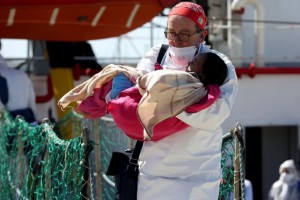 Just so we’re clear about who the refugees are: this doctor disembarking from a Doctors Without Borders ship in Sicily is carrying a child rescued on the north Africa to Italy refugee route.

Most photos in media show only boatloads of African men being rescued. Given the rancid state of racism & white supremacy, it’s an image that lends itself to xenophobia & insularity. It is true, according to UN demographics, that nearly 75 percent of refugees from African countries are men & boys because it’s safer for them to travel. Only 10 percent are women & 16 percent are children, including a huge percentage of unaccompanied minors.

Human rights activists don’t ask what gender, age, country, or any other damn thing you are. Being human & wanting asylum is sufficient.