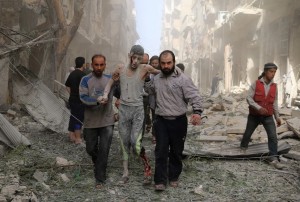 Just so we’re clear on what Syrian refugees (as well as Iraqi, Afghan, & Pakistani refugees) are fleeing from: this is a scene from Fardous, a district near Aleppo, following an airstrike yesterday.

On February 27th, 97 fighting rebel groups as well as the Syrian, Russian, & US-led coalition agreed to a ceasefire. Russia claimed it had grounded its warplanes in Syria. But according to media reports, it was not immediately clear whether strikes were carried out by Assad’s air force or by allied Russian warplanes.

One resident said the bombing & shelling came down “like rain” on public markets & residential areas.

Since the conflict began in 2011, 270,000 people have been killed in Syria & millions forced from their homes.