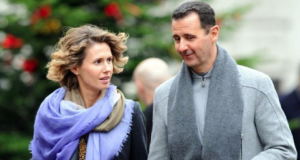 When pretty people carpet bomb a city of 275,000 people for two weeks, it’s done for humanitarian purposes. There are “jihadists” & Islamist terrorists there that have to be exterminated, even if it means leveling Aleppo. If civilians are buried in rubble it must be because they were collaborating with the terrorists.

Calling Syrian & Russian bombing of Aleppo war crimes is just to demonize Assad & Putin when in five years of bombing, arresting, torturing, disappearing, killing, & driving out millions of Syrians, Assad has meant nothing but to show his love & commitment to the Syrian people.

Pretty is the way you can distinguish between the war crimes of dictators & the humanitarian bombing of beloved & stylish leaders.

Photo is Bashar & Asmas Al-Assad. No one so western could possibly be a monstrous dictator.