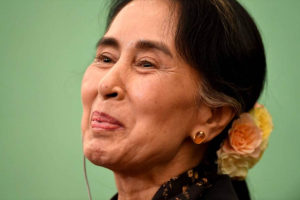 Some international human rights groups have expressed dismay at Aung San Suu Kyi’s refusal to denounce the scorched earth genocide of Rohingya Muslims by the Burmese military going on since October 9th. This chiding of Suu Kyi has been going on since the 2012 military siege against Rohingya. At some point, you have to drop the credulity routine & accept that she has by no means been silent about the genocide but has fully endorsed it & functions as the cynical, smarmy face of the military junta (which really runs Myanmar) to give a human rights image to genocide. She owes her stature as a state functionary to compromises with the junta & is not going to jeopardize that sinecure with protestations about Rohingya human rights. It’s a reciprocity of who’s playing who here: the murderous junta or the sly Suu Kyi.

Some media reports say, for no known reason, that the military operation against the Rohingya has sharpened tensions between Suu Kyi’s six-month-old civilian administration & the junta. You wouldn’t know that from what Suu Kyi says when asked about the charges of mass executions, mass rapes, torture, arrests without charge, the displacement of 30,000 Rohingya after military torching of entire villages. What she has repeatedly said like a ventriloquist’s dummy since the murderous siege began is that little evidence exists to accuse the military of waging genocide against Rohingya but that the government will investigate & release their findings. Wouldn’t you think, given the nature of the charges, that she would feel some urgency to do that investigation before the military has touched the entire state? It’s been nearly two months & she hasn’t sent some minion to look into things?

On November 4th—nearly one month after the military poured into Arakan state by land & air & started torching villages & shooting down civilians—Suu Kyi was in Japan to drum up investment in Myanmar & to receive an honorary degree from Kyoto University for “advancement of democracy in Myanmar & in the world as a whole.” You can’t make up those kind of sarcasms: presiding over genocide & receiving another human rights award she should stuff where the sun don’t shine. No one in the politically stupid or amoral assemblage was so impertinent as to ask her about the Rohingya. Why embarrass her when kissing ass is so much better rewarded?

She spoke at a press conference in Japan where a reporter questioned her about the genocide. She’s become quite masterful at talking gibberish to evade the issue of genocide. She must have learned it from hanging out with Kofi Annan. Make sense of this crap: “The problem in Rakhine state is extremely delicate & care is needed in responding,” & “The Myanmar government is responding to the issue of Rakhine state based on the principles of the rule of law.” She told the press conference there is little evidence to accuse the military of genocide & thus “have been very careful not to blame anybody in particular.”

Human Rights Watch has published high resolution satellite imagery of entire villages torched by the military; Rohingya activists in Arakan have circulated mobile videos of Burmese soldiers committing human rights crimes against Rohingya. All of that is circulating on social media & Suu Kyi thinks she can continue to play stupid?

This is Suu Kyi at the press conference on November 4th in Tokyo–wearing that peculiar constipated mouth thing that we know so well from lying-assed US politicians.