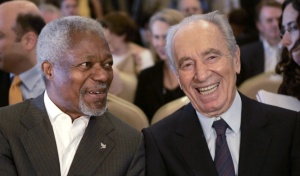 Aung San Suu Kyi & the military junta she fronts for in Myanmar have no reason to be disappointed in their hireling Kofi Annan, the former UN head now reduced to singing for his supper. They commissioned him September 5th to head up an investigation to whitewash genocide against Rohingya Muslims.

Nearly six weeks of reports from Rohingya & international human rights groups (including high resolution satellite imagery from Human Rights Watch) that the Burmese military is on a murderous rampage against Rohingya civilians & finally our man Annan issues a statement ‘calling for an end to the bloodshed.’ And what an appalling statement it is: “I wish to express my deep concern over the recent violence in northern Rakhine State, which is plunging the state into renewed instability & creating new displacement. All communities must renounce violence & I urge the security services to act in full compliance with the rule of law.”

“All communities must renounce violence”? Which communities are those? The unarmed Rohingya civilians? The community whose homes are being torched? Who are being hunted & shot at like animals? Whose women & girls are being raped? Who are the victims of systematic genocide?

There is also the community of right-wing nationalist Buddhists being armed by the Burmese military to participate in the genocide against Rohingya Muslims. Certainly our man Annan doesn’t consider the Burmese army a community. Or does he?
This is a photo of Annan with Shimon Peres, an architect of apartheid Israel who recently croaked. The photo was taken at the 2007 Petra III conference of Nobel laureates in Jordan. The event was co-hosted by the Elie Wiesel Foundation & Abdullah II of Jordan, still called “his majesty” by those who think groveling is copacetic rather than demeaning.

Wiesel, who also recently croaked, addressed the conference with this inspiring rhetoric: “Is it possible to transcend religious beliefs for the sake of peace? Can national loyalty & ethnic allegiance become creative links rather than instruments of suspicion, hatred & death?” It takes steroidal hypocrisy to talk this rubbish while being a theoretical apologist for Israeli apartheid & ideologue of modern Zionism.

Wiesel is famous for saying ““I swore never to be silent whenever & wherever human beings endure suffering & humiliation. We must always take sides.” In his acceptance speech for the 1986 Nobel he said “Whenever men or women are persecuted because of their race, religion or political views, that place must, at that moment, become the center of the universe.” He’s a cornucopia of that kind of stuff but when Israel was carpet bombing Gaza for seven weeks in 2014, he put out a full-page ad in several media sources claiming Palestinians in Gaza were using their children as human shields.

Maybe Annan learned from Wiesel how to talk out of both sides of his ass–how to feign human rights concerns while representing a state engaged in ethnic cleansing. If he were truly committed to human rights he & has posse of commissioners would head straight for Arakan state to document what the military is doing there. Since that isn’t going to happen, we rely on Rohingya & other human rights activists on social media for denunciations of the Myanmar military & for solidarity with the Rohingya.