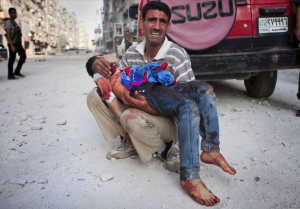 Fascist apologist for Assad dictatorship Vanessa Beeley reposted a video from Fox News where a US special forces guy impugns the White Helmet rescue workers for having a different agenda than the US Pentagon. We knew that. Revolution, which the White Helmets are engaged in, is at odds with counterrevolution which the US, Syria, Russia, & other regimes are carrying out. So why are Assadists led by Beeley on a campaign to link the White Helmets to the CIA? Why is she posting a video where a Pentagon official agrees with Syrian civilians being bombed to smithereens by Syrian & Russian bombers?

To the video, she added this comment by a fellow Assad apologist: “Doubts about White Helmets now reaching even as far as ultra-Right Fox!” To which we respond, but of course. And we ask how she explains all the other Fox News video reports that she, Bartlett, & other Assadists post to document their allegations against the Syrian revolution? Could it be that fascist & Assadist politics are in sync with Fox News? To which we respond, but of course.

To understand what fascist politics mean in Syria, this iconic image is the photo of a father in Aleppo holding his child killed by Syrian bombers in October 2012 after Assad started going after unarmed protesters with bombers & tanks.

The only principled demands are that Syria, Russia, & the US-coalition stop the bombing of civilians & for the immediate, unconditional withdrawal of all foreign military forces from Syria.