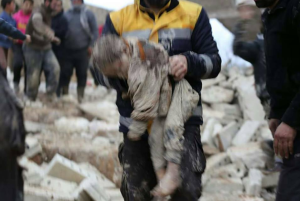 This is how Russian & Syrian bombers defended Assad’s national sovereignty today in Idlib, Syria. Because as we well know from a corrupt antiwar movement led by “retired” CIA, FBI, & US military officials, bombing civilians to smithereens is essential to a dictator’s national sovereignty & his ability to maintain gulags, hang political prisoners, forcibly disappear dissidents, & vilify democracy activists as mercenaries & “head-chopping jihadists.” Bombing children is just collateral damage–or as ex-US Secretary of State Madeleine Albright once put it, “worth it,” when she spoke about the deaths of 500,000 Iraqi children to accomplish US military goals in Iraq. Nothing distinguishes her putrid corruption from the antiwar movement today. Nothing.

The only principled demands are that Syria, Russia, & the US-coalition stop the bombing of civilians & for the immediate, unconditional withdrawal of all foreign military forces from Syria.