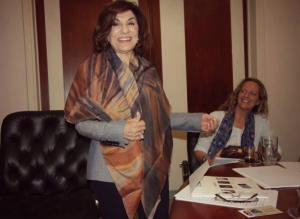 The inevitable collapse in relations has begun between the fascist wing of Assad supporters, led by Eva Bartlett & Vanessa Beeley, & their fellow travelers who claim to be “anti-imperialist.” It isn’t their associations with fascism, Islamophobia, & anti-Semitism that disturb these fellow travelers but that Bartlett & Beeley have been repeatedly exposed as lying propagandists who go over-the-top in defending torture, vilifying civilians being bombed as terrorists (including children & doctors serving in bombing zones), in censorship of articles & reports about Syria, & in bullying & vituperating against all who disagree with them. Such excesses discredit the whole rotten lot of Assad supporters. Some of the more prominent Assadists who have jumped the Bartlett-Beeley fan wagon include Barbara McKenzie from New Zealand, Paul Larudee on the steering committee of the Assadist Syrian Solidarity Movement, Sibel Edmonds, who runs the pro-Assad NewsBud video operation. These people breaking ranks are no prize packages. Edmonds holds up the smarmy, social climbing Max Blumenthal, Ben Norton, & Rania Khalek as examples of reputable journalists though they stoop just as low as Bartlett & Beeley.

What these “anti-imperialist” Assadists want is Assad’s Beavis & Butthead duo to stop harping on the White Helmets & denouncing little kids as terrorists or dolls & to find a less obvious & detestable way of defending the bombing of civilians–like the national sovereignty thing. What these fellow travelers don’t understand is that the Bartlett, Beeley, & Tim Anderson types are associated with the Assad regime at the highest levels & function as ventriloquist dummies to the regime–from Bashar Al-Assad himself, to Syrian politician Fares Shehabi, Syrian representative to the UN Bashar Al-Jaafari, hangman & chief executioner Grand Mufti Ahmad Hassoun, & political & media advisor to Assad Bouthaina Shaaban. Bartlett & Beeley are repeating what they are told & remunerated well to say by Assad regime officials.

This breakdown in the Assadist movement presents some major problems for Assad, even though the level of sycophancy among fellow travelers cannot be underestimated. The greater likelihood is that ways will be found to vilify & isolate the likes of McKenzie, Larudee, & Edmonds in order for the Assad regime to continue using Bartlett & Beeley to promote lowlife & detestable slanders against the Syrian revolution. If Bartlett & Beeley are discredited, the entire propaganda edifice goes with them.

Photo is Vanessa Beeley fawning as Assad political & media advisor Bouthaina Shaaban receives a scarf as a gift from a Norwegian Assad supporter. Shaaban is probably Bartlett & Beeley’s handler within the Assad regime.