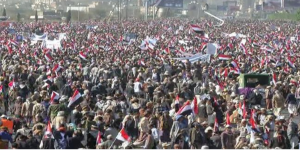 Protests today in Sana’a, Yemen, went on for miles to protest three years of Saudi-US-UK coalition bombing. The coalition includes France, Kuwait, United Arab Emirates, Bahrain, Egypt, Morocco, Jordan, Sudan, & Senegal. The official narratives for the cause of the bombing involve ‘geopolitical” conflict between Saudi Arabia & Iran, the Houthi rebel takeover of the government in January 2015, Al Qaeda & ISIS, the Sunni-Shia conflict. Whatever role those different factors play, the primary intent of carpet bombing Yemen is to destroy every vestige of the Yemen Arab Spring uprising in 2011-2012.

There is very little media coverage of these protests except by RT, Russia’s propaganda news agency, & Press TV, Iran’s propaganda news agency. Russia & Iran of course do not cover the war out of solidarity & most certainly did not support the Yemen uprising. Their purpose is partially to take the attention off their counterrevolutionary savagery in Syria. As far as one can tell from the RT video of the protests today, the marches were organized by the Houthis who undemocratically run Yemen. The Yemeni uprising was politically profound & not all of the participants agree with the program & methods of the Houthis. But on the issue of opposing the Saudi-US-UK coalition bombing, they speak with one voice: Stop the Bombing! Out Now!

(Photo is screen shot from video of the march today)