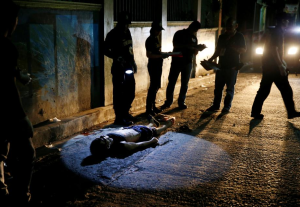 This is the body of Herman Cunanan who Manila police say was murdered by two unidentified men in a drive-by vigilante attack on drug users. The investigation into the murder will dead-end & young Cunanan will end up no more than a police statistic since Philippines president Duterte encourages vigilante executions of poor drug users & street peddlers.

Disregarding his criminality & shamefully ignorant of Filipino politics, many Assad supporters have taken quite a shine to Duterte. They think of him as a hero, a Clint Eastwood kind of guy, for talking trash to US power. It’s too bad some people come of age unable to distinguish the grandstanding of blowhards–especially when the distinctions include mass murder for drug addiction.

Pepe Escobar, who is really taken with Duterte, gives him highest praise because Duterte has “REALLY got balls” for blowing smoke at US power. “Balls” is not a concept found in political theory but it is commonly encountered in barrooms & locker rooms. Is that where Escobar learned his politics? Because he missed the part where democracy entered history & rulers no longer had the right to shoot down subjects in cold blood. He missed the part about human rights for the dispossessed. Why else would he be so cavalier about the lives of poor people shot down because they could not cope with massive inequality & could find no way out of suffering but through addiction?

Duterte is already backpedaling on his grandstanding about separating from the US. Filipino oligarchs have billions invested in a political, economic, & military relationship with the US & they are not going this let this loud-mouthed, psychotic punk undo that just to strut his ‘REALLY big balls.’ If you don’t understand that, perhaps you should consider not writing political analyses & take up hoola-hoop competitions instead.

Meanwhile the families of those assassinated are left to grieve. We stand with them & with those protesting Duterte’s death squads. That is where justice lies. Our condolences to those families & solidarity with protesters. May Herman Cunanan RIP.