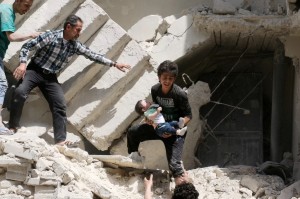 Just so we’re clear on what supporting the Assad regime & foreign military intervention in Syria means:

Making a sarcasm out of the ceasefire, Syrian airstrikes in Aleppo for the past six days have killed over 200 people. The bombing is targeting residential areas & according to witnesses, no neighborhood of the city has not been hit. That death toll is expected to rise. Wednesday they bombed a hospital operated by Medecins Sans Frontieres (MSF/Doctors Without Borders), killing 27 people including children & three doctors. One of the doctors killed was the city’s last pediatrician.

The Syrian military denies bombing the hospital & claims it has not been in residential areas where air raids were reported. Putin made a great display in March of ordering Russian warplanes out of Syria & has previously denied bombing civilian targets. The Russian defense ministry has not been available for interrogation about the current bombing, including of the hospital, even though it is reported that Russian warplanes are involved. So again, it isn’t immediately clear whether the bombing is done by Syrian bombers or allied Russian bombers. But since they work in concert, is there an operative useful distinction?

This scene of people, including many infants & children, being rescued from bombed out buildings or people fleeing the bombing is played out all over Aleppo. Those rescuing them are of course civil defense volunteers, not Assad first responders.

Many people hold stubbornly to support for the Assad regime because it is (at least ostensibly) opposed by the US. The proof of Assad’s political criminality is in the bombing which has gone on for at least five years, killed an estimated 470,000 people, & created one of the most massive refugee crises in the world.

No military intervention in Syria & Iraq! Stop the bombing, including by Syrian & Russian warplanes!