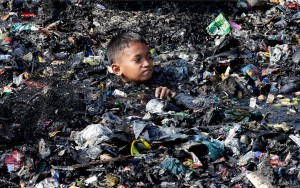 But there is a troubling phenomenon associated with these slums in several countries including India, Bangladesh, Brazil, Nigeria, Kenya: massive conflagrations that burn them to the ground & displace the residents. Fire forensics are seldom reported but officials always give the same litany of speculations: could have been a cooking accident, faulty or pirated power lines, flimsy, flammable building materials, overcrowding, piles of recycling materials gathered by residents from dumpsites to resell, or sometimes just “cause unknown”. Sounds reasonable enough except that residents tell a very different story. They claim fire trucks arrived late to the scene; residents were forced to fight the fires themselves with buckets of water; once they did arrive firemen were unable to douse flames due to shortage of water; & perhaps most damning of all, the fires happened after repeated eviction orders from authorities.

There are hundreds of fires going back over a decade. Arson for purposes of land development & gentrification is the most compelling explanation, given the eviction notices & frequent violent eviction battles between riot cops & residents. It wouldn’t be the first time arson was used to facilitate gentrification. It was not uncommon in the US in the 1970s for urban renewal. The combativeness of residents against evictions might make torching the settlements seem the strategy of least resistance to developers.

Some residents have been killed in the fires, including elderly, infirm, children, & pets unable to escape; many have been injured; people have lost all their belongings; & tens of thousands have been dislocated with no place to go.

The process of development & gentrification using forced evictions & fires is nowhere more ruthless than the Manila metropolitan area in the Philippines. There are dozens of fires every year; there were at least one or two a month this year alone in several districts all charted for development orchestrated by Henry Sy, a real estate tycoon, & Enrique Razon Jr., a shipping magnate, who are two of the four Filipino billionaires. What’s interesting about these two guys is that they use complex real estate swindles to illegally reclaim & refurbish prime real estate without permits & on untitled public domain property occupied by shanty towns. Their real estate swindles are just the vehicle for neoliberal privatization policies which is why so many Filipino politicians, government agencies, the courts, & the cops are involved against slum residents.

There have been three fires in Manila this month in different districts. This little guy is swimming in the debris of a December 10th fire in Malabon city, a district along the rim of Manila Bay, one of the primary areas targeted for development by shipping companies & resort/casino developers.

Housing is a primary human need not available to millions of people worldwide & must become a central political demand. “Money for housing, not for war” is an apt slogan in the Philippines since militarism is a feature of Filipino political rule.