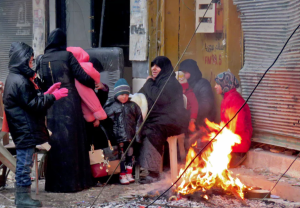 Assadists–a word both epithet & political designation–portray the conflict in Syria as between a secular, benevolent regime & US-backed “jihadist terrorists.” They disappear millions of Syrian civilians, deny the popular democratic movement against Assad & portray it only as extremist Islamist militias driven by Sharia law.

According to media sources, there are over 1,000 armed militias operating in Syria. Who knows for sure? But there are a lot of them & the political character & field of operation of each of them remains unknown, except for the most prominent groups & to Syrian civilians who deal with them in daily life.

Some are Assadist-militias or collaborating with his regime; some are armed & trained by the US, including some by the CIA & some by the US military; others are Hezbollah fighters or mercenaries recruited from regimes for & against Assad. Some developed out of the 2011 popular uprising against Assad when he began bombing cities & civilians to destroy the uprising. These are considered freedom fighters.

There’s no denying some groups, like ISIS & al-Qaeda, are extremists who engage in barbaric acts of war. But Assadists depict them all as “head-chopping jihadists.” “There are no moderate militias” is a central mantra in their repertoire of war propaganda used first by the US Pentagon to justify its “war on terror” & now by Assad to justify military assault on the popular movement against him. Of course it is a question if the paramilitary carnage comes even close to the horrors of Syrian & Russian carpet bombing of cities & hundreds of thousands of civilians that has gone on now over five years.

When those who oppose Assad’s dictatorship, the bombing of civilians, & all foreign intervention into Syria object to the hate-filled, outright Islamophobic depiction of militias, it is not to deny the existence or barbarism of extremist militias. It is to distinguish between militias & civilians & to expose & denounce Assad’s justification for carpet bombing civilians. It is to demand Assadists stop repeating his justifications & stop covering for his monstrous war crimes.

Assadists only oppose US-NATO intervention but if asked to elaborate the strategy of US military intervention in Syria, they can only talk about regime-change & “jihadists” with absolutely nothing to back up their claims. That’s not all their fault because so much of US intervention in Syria is secret–except to Syrians of course. The political problem is that Assadists don’t require such analyses because everything they claim comes straight from Assad & stamped with his approval.

The only principled antiwar demands are:

When the battlefield is cleared & Syrians can come out of their bunkers without fear of being bombed to smithereens, they will effectively deal with Assad–if their remarkable toughness under siege in east Aleppo is any political gauge.

(Photo is displaced civilians in east Aleppo from AFP/Getty Images)