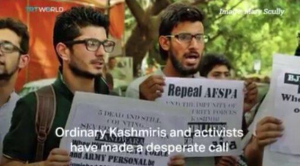 The Armed Forces Special Powers Act (AFSPA) is a draconian Indian law that gives its army impunity for human rights crimes committed where it is deployed, including in Kashmir & against Indians who protest government policies. It isn’t unique to India since the US has forcibly negotiated similar agreements with Iraq & Afghanistan where US human rights & war crimes are not just routine but encouraged. That explains why so many soldiers return to civilian life with PTSD, mental health, addiction, & domestic violence issues, make up a huge percentage of prisoners & homeless, why veterans have a suicide rate of over 22 people a day & active duty soldiers a suicide rate over twice that of civilians. There are just beginning to be reports on the increasing number of soldier suicides among Indian troops in Kashmir. They still do not reveal the number of suicides or other problems among veterans. A similar situation is emerging among Israeli soldiers. Genocide against the Rohingya people in Burma will fully takes its revenge on Burmese society when soldiers return to civilian life & try to lead a normal life.

Most young people are not raised to engage in brutal criminality, including mass rape, violence against children, elderly, women, & unarmed civilians, or to engage in torture, & forcible disappearance. They are inculcated with racism in basic training to enable them to see people in occupied countries as beasts rather than fellow human beings. While they may follow orders when deployed, they break down & act out their psychological distress when they return to civilian life–& as the soldier suicide rate shows, even while deployed.

There is a long political tradition in many countries of reaching out to soldiers, especially veterans, to engage them in antiwar/anti-occupation activities & use their voices to expose & actively oppose war & occupation. Part of that is denouncing the AFSPA & similar security agreements armies use to grant impunity to unspeakable human rights crimes. Those under brutal occupation cannot be expected to reach out in fellowship to the perpetrators of violence but they are an essential component in building antiwar & anti-occupation movements.

The photo here is of an anti-AFSPA protest in India by Kashmiri & Indian students.

(Photo is from Abid Jeelani)