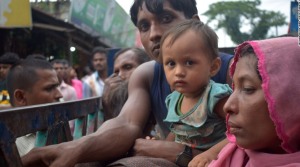 Media continues to report that the latest genocidal campaign against the Rohingya came after the Arakan Rohingya Salvation Army (ARSA) attacked police posts & an army base in Arakan state. That’s what the Burmese government claims. No one knows if such a group really exists, if it does how big it is, who arms them, if they do anything other than issue videos to YouTube, & how many agents provocateurs are involved. Their oldest video is only a few months old.

But it doesn’t matter because the Burmese military was preparing itself for this onslaught by deploying extra troops in Arakan & training & arming Buddhist nationalists as civilian death squads. The military junta initiated this genocidal campaign & would have done so whether ARSA existed or not. In fact, if ARSA didn’t exist, they would have to invent it.

The Rohingya people have a right to defend themselves by any means necessary. The jury remains out on ARSA as part of that. But to go along with media & the Burmese junta that they were provoked into genocide by ARSA is a detestable mockery of the Rohingya people.

Photo is Rohingya refugees near the Kutupalong refugee camp near Cox’s Bazar, Bangladesh.