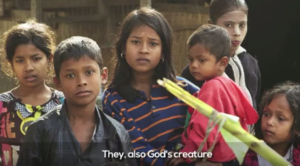 This is an anthem in solidarity with Rohingya who have stood alone for decades against genocide by the Burmese military junta.

Rohingya refugees around the world have initiated an international solidarity movement, educating, rallying, protesting the genocide.

It didn’t take long for the multinational corporations investing billions to “neoliberalize” the economy of Myanmar to take the offensive against solidarity by claiming there is no genocide but only a military crackdown on growing “jihadist terrorism” among Rohingya.

The first volley in this propaganda campaign against Rohingya was issued by the International Crisis Group in its recent report which doesn’t exhibit the research skills or integrity considered de rigueur for an honest 7th grade book report.

We cannot allow the growing solidarity with Rohingya to be preempted by liars & profiteers but must increase our campaigns in their defense.

This is shared from the Facebook wall of Mohammed Imran who is an elected representative in a Rohingya refugee camp in Bangladesh.