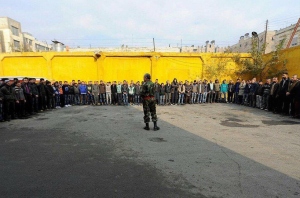 So as Assad’s Vanessa Beeley tells it, she accompanied Assad official Fares Shehabi & the Syrian army into east Aleppo as it was being ‘liberated’ from “head-chopping jihadists.” As they advanced into the city, Shehabi was issuing threats of vengeance on social media.

Her first & only mission in a city with thousands of war-traumatized & terrified civilians & reduced to rubble by over five years of daily Syrian & Russian bombing was to hunt down the White Helmet rescue workers she had been doing investigative condemnations about for months & get civilians to finger them for the army.

The White Helmets were the people plowing through cement rubble to rescue people’s children, elderly, disabled, infirm, beloved parents & siblings who had been buried by the bombing. While accompanied by her Syrian military security, she interviewed civilians about the White Helmets but according to her they gave her quizzical looks & said they never heard of them.

Fares Shehabi posted this photo on Twitter (on December 12th) of men & boys from east Aleppo rounded up by the Syrian army as it took over. He referred to them as “terrorists,” though he had no way of knowing whether they were militia fighters, White Helmets, or civilians. Due process of course is no part of dictatorship even though according to international law it is supposed to be part of the treatment of war prisoners.

This kind of “investigative journalism” is a sarcasm. Beeley is not a journalist nor does she know anything about war or Syrian politics. By her own admission, she has only four years of hanging out doing something in Palestine & no claims as a legitimate journalist. It is not inappropriate to interrogate how she emerged to prominence as a propagandist for Assad & to ignominy as Assad’s own Leni Riefenstahl.