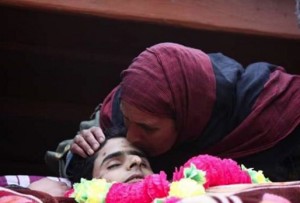 A distinctive feature of occupation in both Kashmir & Palestine is the ruthless targeting of young people by occupation forces. It’s not an accident, or that hundreds of young people just get in the way of bullets; it’s a strategy to demoralize & terrorize by murdering youth. Grief becomes a prevailing emotion feeding rebellion because you cannot get away with killing the young & expect subservience. There’s a price to pay for barbarism.

This is the mother of Syed Mufeed Bashir who was killed yesterday in Kashmir. His death is reported with the same tiresome scenario dished out by Indian military officials to justify assassinations of youth in what they call “encounters”: They claim he was a “militant” on the run. They received a tip he was in a certain town so they cordoned the entire area & began shooting & lobbing grenades. Even from a military standpoint, it doesn’t make sense. Though from the point of view of occupation, it’s the modus operandi.

They claimed he belonged to an armed resistance group. So what? Had he committed any crimes? Shot at anyone? Done anything to break the law? Or does he just have no political rights of association? How do they explain why so many unarmed young people are murdered by Indian occupation forces? Or thousands disappeared?

Massive protests that went on for hours were held in his hometown & in other towns after they heard news of his assassination. A complete shutdown was observed in his district. Thousands formed a funeral cortege to honor him.

We may not agree that armed resistance is the wisest strategy–especially when you’re outgunned by nearly a million soldiers. We can’t even be certain he was armed, as the Indian military claimed after they murdered him. We only know people have a right to throw off brutal oppressors by any means necessary.

We respect young Syed Mufeed Bashir & express our condolences to his family, friends, & fellow activists. May he Rest In Peace.

(Photo from wall of Abu Dawar, thanks to Sameer Ul Haq)