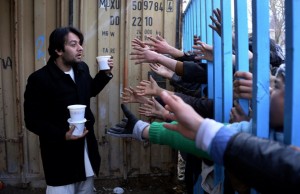 This photo is taken in Mazar-i-Sharif, Afghanistan, the site of the Blue Mosque (also known as the Shrine of Hazrat Ali) & the first city to fall to the US-NATO occupation in 2001. About 3,000 Taliban fighters who surrendered in that battle were gruesomely massacred & buried in mass graves. The unspeakable crime is documented by the Irish filmmaker Jamie Doran & Afghan journalist Najibullah Quraishi in the 2002 “Afghan Massacre: the Convoy of Death.” Because the US military was involved in the egregious war crime, the US has blocked investigation.

The media caption to this photo read: “Afghan men & children reach out for food donated by a charity. Afghanistan’s economy has improved significantly since the fall of the Taliban regime in 2001 largely because of the infusion of international assistance.” This is another case of a photo worth a thousand lies. All that international assistance & all they get after nearly 15 years of occupation is a styrofoam cup of mush!? And that’s significant improvement?

It’s impossible to tell how much actual humanitarian assistance Afghans have received since international assistance figures include military expenditures (like bribing officials, paying mercenaries, & maintaining torture centers) & it’s all administered by USAID & the Pentagon. But even by USAID figures, humanitarian disbursements amount to chicken feed relative to military costs. They claim it was 8% of their total budget in 2012. That means 92% of the budget goes to military.

Some international assistance is for reconstruction & development. Most of that money comes back to the US & its NATO allies in the form of contracts to private firms. A lot is just stolen outright. Most of the so-called humanitarian aid is given to establishment NGOs like Oxfam, Save the Children, & Kissinger’s outfit, the International Rescue Committee (IRC). It’s not clear what Oxfam is doing with the money but Save the Children & IRC have been messing with Afghan public education. (When they’re through with it, it won’t exist.) At one point, USAID tried to extract agreements from these groups that they would serve US military purposes if they got grants. Some of them claimed they refused. In the competitive world of NGO funding, that would be the kiss of death. The IRC was organized of course precisely to serve US military purposes which is why more than half it’s budget is from the US government.

From a massacre to mass starvation: that is the legacy of emancipation US-style. There are antiwar protests being planned for March. Get your placards ready: US out of Afghanistan! US out of Iraq!