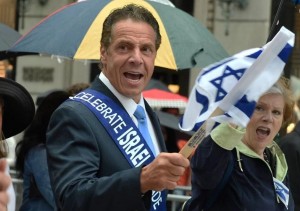 This is New York governor Andrew Cuomo marching in the annual pro-Israel march in NYC last Sunday. This isn’t like showing up at a St. Patrick’s Day parade in a leprechaun hat to garner Irish-American votes. This is political pandering of a much more malignant kind. He’s not just playing to Jewish voters but to AIPAC, Israel, & to Haim Saban & Sheldon Adelson, the two Zionist billionaires willing to spend millions to defeat BDS. Cuomo was an official in the Bill Clinton administration & often accused of being a dirty dealer. He would fit right into a Hillary Clinton administration & may well be angling for that.

In June 2015, the NY State Assembly (the lower house of the state legislature) issued a resolution denouncing BDS. StandWithUs, the pro-Israel group that lobbied for the resolution, hoped the resolution would be followed by a bill outlawing BDS. In January 2016, the NY State Senate (the upper house of the legislature) passed a bill prohibiting the state from doing business with companies that honor BDS. StandWithUs has been lobbying its ass off to get the Assembly to now pass the bill. In March, drawing on the dregs, they even brought the smarmy Bassem Eid (a Palestinian collaborator with Israel) to lecture the Assembly about the perils of BDS.

Apparently Cuomo & his Zionist advisers got tired of waiting for legislative action & just preempted the process by issuing the executive order. Maybe he wants to get it done in time to be considered as a vice presidential candidate to Clinton. Opposition to BDS, which she has sworn to defeat, would stand him well.

It isn’t certain what legal action will prevail against the executive order but it’s likely civil liberty & Palestinian solidarity groups will initiate actions because it’s an arrant violation of the Bill of Rights. What is certain is that political action opposing this attempt to destroy BDS & civil liberties is more imperative than ever. How dare these two-bit hustlers think they can advance their careers on the backs of Palestinians & on the corpse of civil liberties!

Build the economic, cultural, & academic boycott of apartheid Israel. Don’t be daunted by the hustlers anymore than Palestinians are by the military might of Israel.