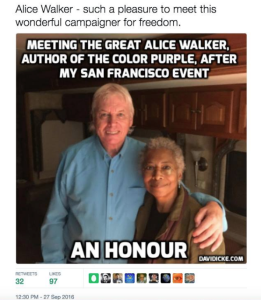 Reposting this from March 23rd, 2017 because understanding the issue of how anti-Semitism entangles with Islamophobia is extremely important. Nothing shows that more clearly than supporters of Assad who openly hate on Jews, ascribe to that Illuminati crap about Jewish bankers, & blame the entire Syrian conflict on Israel & its alleged plans for a “greater Israel.” Those who don’t understand how compromised the antiwar & Palestinian solidarity movements become by ignoring the motivation & presence of anti-Semites use the metaphor of marching with the devil for justice. What they don’t understand is that these anti-Semites & Islamophobes are not marching for justice but only to increase the persecution of Jews & the oppression of Muslims.

It is profoundly disturbing, actually horrifying, to learn the author Alice Walker, a long-time supporter of Palestinian solidarity & a participant in the 2011 Gaza Flotilla, has been a public & ardent apostle of libertarian David Icke since 2013 & advances his ideas on her website & in media.

Like KKK & white supremacist David Duke, Icke & his apostles like Eva Bartlett & Vanessa Bartlett, associate with Palestinian solidarity only for a platform to spread the hatred of Jews. Their role as propagandists for Assad are manifold: support for his fascism & contempt for working people; hopes the Syrian counterrevolution will help to destroy Israel & massacre Jews; admiration that the Assad dynasty has expelled all Jews from Syria. The struggle of Palestinians against colonialism & apartheid is no part of their considerations. Their goal is not a democratic, secular state for Palestinians & Jews to live in harmony but the extermination of Jews–before they then turn on Palestinians, the Semitic cousins of Jews.