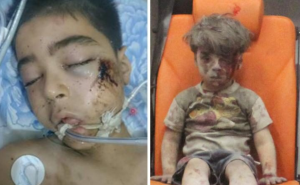 It has been confirmed to NBC News by the hospital in Aleppo, Syria, that Ali Daqneesh, the 10-year-old brother of Omran, died today from injuries sustained in the same Syrian or Russian airstrike that destroyed his family’s home.

While the rest of the family, including Omran & three other siblings, escaped their home with minor physical injuries & major psychological trauma, Ali was playing in the street with friends when the bombs exploded last Wednesday.

It is estimated that at least 400,000 have died since 2011 as a result of bombing by Syria & its several military allies, including particularly Russia. We know that includes tens of thousands of small children.

May little Ali Rest In Peace. May we not rest until we actively oppose this monstrous war.
****
Ordinarily I do not post gruesome photos but I make this exception to assure conspiracy theorists & Assadists that we are not being played by the US Pentagon & that the death of this small boy is not being staged–& perhaps also in the hope that they will feel shame for their vile imputations against 3-year-old Omran.
(Photo of Ali & Omran from The Telegraph News)