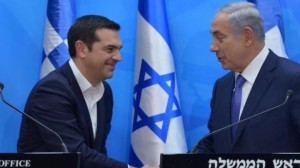 Isn’t this a regrettable–if not also entirely predictable–moment in politics? Netanyahu greets Greek prime minister Alexis Tsipras last Wednesday in Jerusalem. Tsipras is the head of Greece’s Syriza government. Syriza (an ostensibly left-wing political party) was elected by almost two-thirds of the Greek people in January 2015 on an anti-austerity program. The expectation of Syriza was that they would stand up to the IMF & reject programs impoverishing working people & pensioners to enrich German banks.

Before the election, Syriza opposed military cooperation with Israel & supported Palestinian rights to bantustates–so when it came to Palestinian self-determination their leftist views didn’t go that far. If justice were incorporated into their political program, they would call for a democratic secular state for Palestinians & Jews. Tsipras publicly denounced the Israeli carpet bombing siege of Gaza in 2014 calling out Israel for targeting children & calling for solidarity with Palestinians. In 2011, he had even been slated for a flotilla to Gaza to break the Israeli blockade. The flotilla was not allowed to leave the Greek port by the then Greek regime.

Before Syriza was elected, Tsipras also opposed the draconian austerity measures imposed on Greek working people by the EU-IMF. Betrayal came quickly to him. On the morning after his election, his first act as prime minister was to form a coalition with a far-right political group & within a few weeks he’d brokered an agreement accepting the austerity measures. Tsipras & his party are the kind that give the left-wing a bad name & make them indistinguishable from their right-wing allies.

By July of this year, Syriza had signed a military alliance with Israel similar to the kind the US has with Thailand, the Philippines, Indonesia, Malaysia, Australia, is attempting to forge with Japan, & that Israel has with India, the US, & Myanmar. Greek military forces will train in Israel; Israel is already doing combat training & joint exercises in Greece with helicopters & bombers–the very bombers targeting small children in Gaza. Where are Tsipras’ alligator tears now?

Tsipras isn’t the first Greek official to visit Israel. He was preceded by the Greek Defense Minister & member of the right-wing coalition party who signed the military accord with Israel on behalf of Syriza–& also by the Greek Foreign Minister who held talks with Netanyahu on strengthening alliance between Greece & Israel.

High-tech military alliances are daunting opponents in the struggle for Palestinian justice. Building BDS among working people in Greece & around the world is a powerful counterforce. International solidarity is a powerful force that cannot be overestimated.

(Photo of Tsipras the betrayer & Netanyahu by Kobi Gideon/GPO)