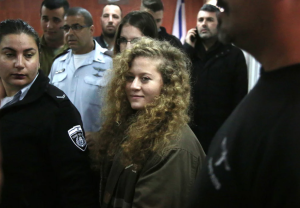 The dignity of Palestinians who stand against apartheid & ethnic cleansing: 17-year-old Ahed Tamimi arriving in Ofer military court near Ramallah, West Bank, to face twelve charges in a kangaroo court for slapping two Israeli soldiers armed to the teeth.

The hearing on Tuesday was closed to the public & to journalists since kangaroo courts cannot tolerate too close a scrutiny. Her trial was postponed until March 11th. Reportedly, nearly 100% of all cases in Israel’s military kangaroo courts end in convictions.

International defense of Ahed Tamimi is part of solidarity with all Palestinian political prisoners, including children. Every year an estimated 500 to 700 Palestinian children are arrested & prosecuted in an Israeli military court, mostly for stone pelting which carries a sentence of up to 20 years in prison. As of December 2017, 321 children were political prisoners in Israeli prisons where they are subject to abuse.