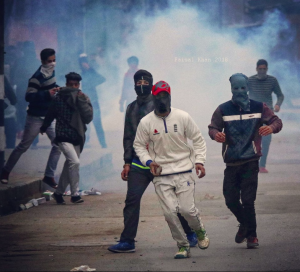 Mehbooba Mufti, India’s chief minister in Kashmir, reported last month that in the past two years the government had arrested 11,290 stone pelters in Kashmir. She claimed that first-time stone pelters between 2008 & 2017 were released on amnesty with conditions that parents take action to prevent future resistance to occupation. What actually happened to most of these young people–whether they were released, detained, placed in administrative detention, charged with a crime, or are subjected to harassment or other punitive measures wasn’t reported. Except that Mufti did report steps taken to “wean” young people away from “anti-national activities & militancy,” including surveillance on social media & periodically shutting down the internet. Another measure is to impose restrictions on protests like those on February 11th, the day to commemorate freedom fighter Maqbool Bhat who was hung by the Indian government on February 11, 1984.

These are protesters, with a stone pelter in front, on February 11th in Srinagar to commemorate the life & death of Maqbool Bhat. May his legacy always inspire them in their struggle for freedom as he inspires the oppressed around the world.