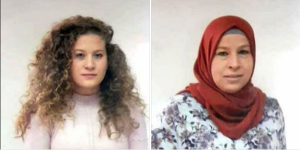 Seventeen-year-old Ahed Tamimi & her mother Nariman were both sentenced to eight-months in prison plus a $1500 fine for each for assault charges. Their cousin/niece Nour was sentenced to five months. Compare this to the sentence of Israeli soldier Elor Azaria who in March 2016 walked up to a Palestinian teenager lying incapacitated from a gunshot wound on a Hebron street & shot him in the head. Despite video documentation, Azaria was sentenced to 18 months, later reduced to 14 months, for manslaughter. He will be released in May after serving 10 months of his sentence for summary execution.

When Ahed was asked how she felt about her sentencing, she responded, “There is no justice under occupation.” Damn straight, there isn’t.

End the occupation of Palestine. Self-determination for Palestinians.