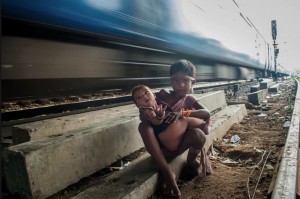 This would be every parent’s nightmare: a little girl, who can’t be more than five or six, holding her infant brother only feet from a moving high-speed train. It’s likely she’s been entrusted with his care because their parents work. The Guardian-UK caption read only, “A girl holds her brother while a train passes behind them near Okhla railway station,” in New Delhi, India. Honestly, one would think a little journalistic investigation would be required here.

One can damn parents till the cows come home for being reckless but this is the reality all over the world, not just in India, since childcare is considered solely a parent’s responsibility, private care is costly, family members cannot always provide it–& to eat & have housing, work is essential. Affordable, safe childcare is a primary demand of women’s rights.

These little kids are likely from the community of 20 mostly Dalit & Muslim families (150 people) who live in a slum near the Okhla Railway Station. Close proximity to the railway means they bear the brunt of waste, including human poop, discharged from the trains along with a persistent water stagnation problem in the area due to sewage runoff & lack of sanitation. This causes many health problems but under neoliberal policies there are no public clinics in the district so people have to shell out money for private care.

Maybe if Modi pulled his ass out of his peace asana, ended the military occupation of Kashmir, & stopped buying bombers & military arsenals from the US & Israel, then India would be able to afford sanitation, healthcare, & childcare for working families–& they wouldn’t have to put their little kids in charge of their infants. But such is the price of militarism which the poor of every country bear the brunt.