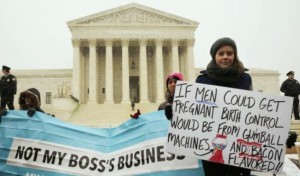 Since the 1973 US Supreme Court ruling on Roe v Wade legalizing abortion, the right-wing has relentlessly pursued its reversal. They have organized & bankrolled hundreds & hundreds of legislative initiatives, court challenges, public protests including at abortion clinics, & some have not stopped at violence & assassination.

This has gone on for over forty years with very little response from abortion rights activists. The reason for the lack of political opposition is that early on leading figures of the feminist movement like Betty Friedan & Gloria Steinem won a ferocious battle within the movement to tie it to the Democratic Party, the graveyard of social protest movements. When abortion rights were won in January 1973, the movement went into a prolonged eclipse. The thousands of women’s groups that had been formed from every kind of constituency–lesbian, Chicano, Black, disabled, religious, military, socialist, even Republican–now became little more than an answering machine or post office box. The movement that gets charged by know-nothings with so many crimes & receives so little credit for its monumental achievements actually only existed as a social movement for a matter of years. But its thrust was so massive & so powerful that it changed the lives of millions of women for what then seemed forever.

The primary feminist organization remains the National Organization for Women (NOW), which has an electoral & legalistic perspective & engages very little in massive mobilizations to defend reproductive rights. On the few occasions since Roe v Wade that NOW did put out a call for national protests in Washington, DC, hundreds of thousands of abortion rights activists responded.

You can’t just snap your fingers & materialize a social movement, no matter how dire the need. But those who value women’s rights must begin to collaborate, agitate, organize because an assault on Roe v Wade is rolling in piece-meal & right along with that a wholesale attack on every right won by millions of women in hard-fought battles.

Many pro & anti-reproductive rights protests have been held in front of Hobby Lobby stores but there are other corporations included in this decision. They should all be identified, boycotted, protested, & notified that they are under economic siege for daring to challenge women’s right to reproductive freedom. NOW should be strongly encouraged to organize local & national protests in defense of women’s rights.