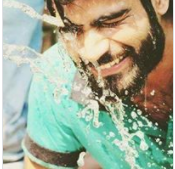 Aamir Nazir Lattoo, a 23 year old graduate student at Aligarh Muslim University (AMU) in India, was martyred by Indian Occupational Forces on July 12, 2016 while home on vacation. His family took him to the local hospital in Bijbehara where the doctors administered first aid & called an ambulance to take him to Srinagar.

His father Nazir Latoo reports that as the ambulance was about to leave occupying forces attacked & vandalized it, beat the driver forcing him to flee, assaulted family members & attendants of another injured person, tore out the IV tubes on Aamir’s arms, & detained the ambulance which delayed emergency medical care in Srinagar. Unable to receive critical care in time, he died the next day.
Aamir Nazir was known as passionate about Kashmiri freedom & thousands participated in his funeral prayers.

Kashmiri students at AMU, in an assertion of Kashmiri self-determination, are honoring Aamir by organizing an annual football tournament in his name. They said: “The tournament is aimed at reliving every single memory that we have of our beloved brother, Aamir Nazir. This event, to be played every year insha’allah, would keep reminding us of the cause that our martyrs like Aamir have laid their life for.”

Please like & share the Aamir Memorial Football Tournament page as an act of solidarity & in tribute to his life.

The Greater Kashmir posted this article about the gruesome assault on the ambulance: